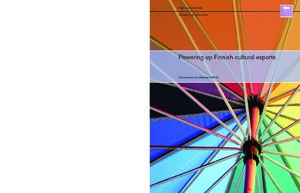 Publications of the Ministry of Education, Finland 2008:43
This publication is copyrighted. You may download, display and print it for Your own personal use. Commercial use is prohibited.
Näytä kaikki kuvailutiedot

The task of the Working Group for the Development of Cultural Exports was to draw up a national programme for cultural export promotion. The objective was to facilitate, through cooperation between the members of the Working Group, the emergence of cultural sectors into export sectors equal to other export sectors, and thereby improve employment, support business development as well as increase the turnover of companies operating in creative sectors.

The Working Group has drawn up the Programme for Cultural Export Promotion 2007-2011. The vision of the Programme is the following:

The Working Group decided that especially entrepreneurship, clusters and networks, international marketing and promotion, structures promoting cultural exports and the knowledge base, international cultural cooperation as well as competitive legal operating environment should be developed.

The Programme will primarily make use of existing structures. Measures to be used fall into the following categories: programmes and sets of measures, project financing, export circles, joint initiatives and training, sectorial research and statistics, support network for cultural exports, and the general support system for the arts and culture.

In addition to the resources of the Ministries and other agencies represented in the Working Group, the entrepreneurship of creative sectors will be promoted through the different Structural Funds programmes. It is estimated that in total, some 228 million Euros will be allocated to the implementation of the Cultural Exports Programme between 2007 and 2011.