State Support for Digital Content Creation in Finland : Evaluation of the DigiDemo Programme in 2003–2006 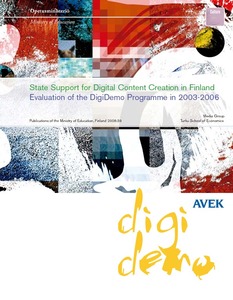 Publications of the Ministry of Education, Finland 2008:39
This publication is copyrighted. You may download, display and print it for Your own personal use. Commercial use is prohibited.
Näytä kaikki kuvailutiedot
Tweet

The digital production and distribution environment has for long seen a great need for product development of cultural content. Digital content development has traditionally emphasised technology. This has meant that public support has mainly been targeted at technological innovations. Yet throughout the late 1990’s, the idea of content being king and technology its servant gained ground. Changes in support measures, however, are slow.

In the autumn of 2002, the Ministry of Education and the Promotion Centre for Audiovisual Culture (AVEK) agreed on supporting product development of audiovisual content through a pilot project named Funding for Product Development for Creative Industries. to users and suitable for new digital devices. Above all, the project aimed at content-based product development.

The idea of supporting product development of content came from producers in the au-Project that was part of the Government’s Programme (2000-2003). The goal here was to initiate a large-scale and cross-administrational project with the aim of developing content for the information society. One of the most important outcomes of the Content Production Project was DigiDemo, the project analysed in this report.

During 2003 - 2006 the total amount of subsidies was small, approximately €115,000 annually. Internal evaluations of the allocation showed that the new and developing sector of content production welcomed this new support mechanism. However, voices were the needs of the fast developing sector.

In the autumn of 2005, the Ministry and AVEK launched a new three-year (2006-2008) Digital Demo Project. The basic objectives were kept the same, but were more clearly were allocated twice a year.

DigiDemo subsides are targeted at pre-production stage projects which have a good chance of going into production. Funding is granted for developing a project’s concept (or manuscript) or plan, or for the actual demo phase. Criteria for granting subsidy include the project’s level of innovativeness, and its prospects of commercial success.

The assessment of subsidies for projects of content development have been administered by a steering group and by an expert group chosen by the steering group.

The feasibility and effectiveness of DigiDemo was studied by an outside evaluator. The report of this study, which focuses on the commercial effects of content production projects, was carried out by researchers of Turku School of Economics Media Group. Results of the report will be used in planning future measures.

One could say that the original aim of the measure has been reached: DigiDemo sub-sidies have been important for pre-production phase development projects, for which very little other funding is available. The programme has been particularly effective in the -ally risky but promising productions. DigiDemo can be compared to support granted by TEKES (Finnish Funding Agency for Technology and Innovation) for technological innovation projects.

It is clear that there is still a need for product development of digital content. New models and good practices are constantly being sought in various EU development projects in order to enhance culture-based content production and strengthen the creative industries.