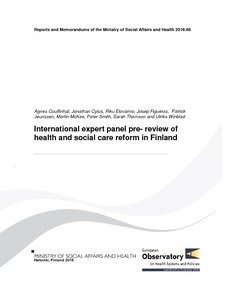 Reports and Memorandums 2016:66
This publication is copyrighted. You may download, display and print it for Your own personal use. Commercial use is prohibited.
Näytä kaikki kuvailutiedot
Tweet

The Ministry of Social Affairs and Health invited the European Observatory on Health Systems and Policies to organize a panel of international experts to provide an evidence-informed pre-review of proposed comprehensive health and social care reform measures in Finland. The panel consists of high level experts from the Observatory, WHO Regional Office for Europe, OECD and academic institutions. The review has four broad aims:
• To review the objectives of the reform proposals
• To assess the expected impact of reform proposals by analyzing the strategies for re-form and drawing on experience with similar reforms elsewhere in relevant countries
• To identify prerequisites to enable effective reform implementation
• To provide possible recommendations to adjust reform proposals in light of the results of the analysis.
The international panel carried out two workshops in July and September 2016 to meet with over 50 experts and stakeholders in Finland, and also reviewed a range of technical documents. The panel presented its preliminary observations in October 2016 to the Ministry and key stakeholders. During the work of the panel the draft legislation for health and social care reform was sent for public consultation and the legislation for freedom of choice was under preparation. The panel’s observations on the expected impact of the reforms and prerequisites for success are based on evi-dence-based expert opinions derived from the panel’s professional experiences, analysis of interna-tional evidence and understanding of the Finnish proposals.