Sport and Equality 2011: Current state and changes of gender equality in Finland 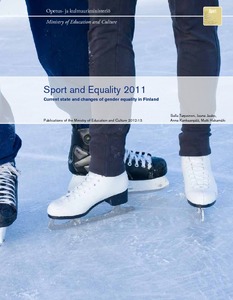 Publications of the Ministry of Education and Culture 2012:13
This publication is copyrighted. You may download, display and print it for Your own personal use. Commercial use is prohibited.
Näytä kaikki kuvailutiedot

This report is a follow-up for the 2005 work group “Draw” (Tasapeli) memo and to its statistical part “Men and women in sports in numbers”. This report describes the current state of gender equality, and compares new information to the facts presented in 2005. New points of views are brought in by, for example, describing gender impact assessment. The purpose of the report is to produce general impression of gender status in sport and offer ideas for the efforts of planning, directing and leading future development.

Boys participate in sports club activity more often than girls do in all age groups. On average, boys have more practices a week and one session lasts longer. Also men participate in sports club activities more than women do. Women and girls’ participation rates in organized sports club activity have risen over the last few years more than men and boys’, therefore the margin between genders has decreased. Women use sports services provided by the private sector more than men do. However, there is only a little information of the sports’ private sector. Both men and women’s physical activity levels have decreased, and participation in organized activities has increased.

There are clear differences in the participated sports. Three most popular sports for boys are football, ice hockey and floorball. The results for girls differ in different studies. Some sports are clearly gender related. Gender related stereotypes in sports should be demolished and prerequisites should be created so that both genders could participate in all sports. Football and ice hockey are examples of sports that have traditionally been men-oriented, but the number of female participants over the last years has increased. Men form the majority in physical activity decision-making and leadership roles. Women are particularly scarce in elected leadership positions. Women account for 27 % of the Finnish Sport Federation (SLU) community administrative board, and 24 % of its executive directors and 15 % of chairpersons are women. Administrative boards of National governing bodies consist of 24 % women, with 25 % of executive directors and 11 % of chairpersons women. The number of women has increased during the last 15 years. Thirty-one percent of the leading municipal offucials in sports are women. In particular, the amount of female municipal sport directors has increased over the past few decades. Sports councils consist of 48 % women. The law of equality has increased the number of women in municipality decision-making. The participation of both genders in decision-making needs to be encouraged in the future, and the enhancement of women’s career development needs to be continued.

Equality thinking should be changed to begin at the grass root level, where sport’s gender order is first produced. Thinking should begin from girls and boys, mothers and fathers. National sport politics and organisation programmes should include plausible effective mechanisms that would enable the described situation. This report has proved that with allocated actions and resources as well as political will-power it is possible to accomplish changes. It is the actors own decision what they want to do.