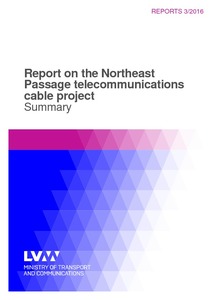 Raportit ja selvitykset 3/2016
This publication is copyrighted. You may download, display and print it for Your own personal use. Commercial use is prohibited.
Näytä kaikki kuvailutiedot

The Northeast Passage underwater fibre cable connection (Arctic Connect) has been studied for several years. The underwater part of the system would consist of a connection of about 10,500 kilometres from Japan and China to Kirkkoniemi in Norway and the Kuola peninsula in Russia. It would enable several landfall points to be established on this route in Northern Russia.
The cable connection would make it possible to implement a fast physical telecommunications route from Asia to Northern and Central Europe via Norway, Russia and Finland. This would be possible because it would be connected to the Baltic fibre cable connection between Helsinki and
Rostock. In addition to providing speed, the cable would also respond to the rapidly increasing need for capacity and would provide a reliable alternative to the risky southern routes.
The Northeast Passage cable project would be broad and multinational, and implementation would require commitments from at least Russia, China, Japan, Norway and the relevant EU countries. In addition, the European Union would have a significant role in the international cable project both as a beneficiary and in providing funding.