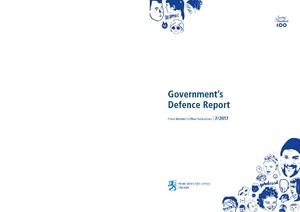 Prime Minister’s Office Publications 7/2017
This publication is copyrighted. You may download, display and print it for Your own personal use. Commercial use is prohibited.
Näytä kaikki kuvailutiedot
Tweet

The Defence Report was drawn up after the Parliamentary study group’s report (Parliamentary Office Report 3/2014) and after the Government’s Foreign and Security Policy Report (Prime Minister’s Office publications series 7/2016). The Foreign and Security Policy Report evaluates Finland’s operating environment and also presents the areas of focus and the objectives of Finland’s foreign and security policy. The Defence Report takes note of the changes in the military operating environment. The time span covered by the report exceeds the term of this Government and extends to halfway through the 2020s.

The Defence Report and its implementation will ensure Finland’s defence capability in a changing security situation, will create the conditions for maintaining a credible defence system that covers the whole of the country, will set out the guidelines for implementation of strategic capability projects, improve the preparedness of the armed forces and steer the deepening of defence collaboration as well as the development of national legislation