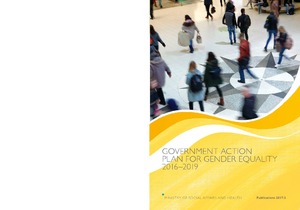 Ministry of Social Affairs and Health

Publications of the Ministry of Social Affairs and Health 2017:3
Näytä kaikki kuvailutiedot
Tweet

The Government Action Plan for Gender Equality 2016–2019 collates the objectives and measures by which Prime Minister Juha Sipilä’s Government promotes equality between women and men. The Action Plan is an instrument for coordinating gender equality policy in the Government. It incorporates measures that all ministries bear responsibility for in their respective administrative branches. The measures included support the attainment of the objectives of the Government Programme. The Action Plan consists of approximately thirty measures concerning working life, equal pay, economic decision-making, immigrant reception and integration services, reconciliation of work and family, parenthood, gender segregation in education and labour market, education, sports resources and library services, violence against women and intimate partner violence, and men’s health and wellbeing. The Action Plan also includes other measures to ensure that all ministries assess the gender impacts of their activities and take them into account in their decision-making. The preparation of the Action Plan for Gender Equality is based on, among other things, the results of a hearing of the key stakeholders and on negotiations between ministries. The definitions of policy outlined in the Government Report on Gender Equality, and on the other hand, responding to international obligations have both underlaid the preparation. The implementation of the Action Plan requires extensive inter-ministerial cooperation and commitment. The Government Action Plan for Gender Equality 2016–2019 was adopted as a Government resolution on 4 May 2016. A working group will be appointed to support and monitor the implementation of the measures of the Action Plan and to report to the Government. The Ministry of Social Affairs and Health coordinates the work in relation to the Action Plan and its follow-up