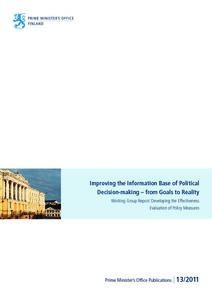 Improving the Information Base of Political Decision-making.pdf (738.9Kt)
Lataukset:

Prime Minister’s Office Publications 13/2011
This publication is copyrighted. You may download, display and print it for Your own personal use. Commercial use is prohibited.
Näytä kaikki kuvailutiedot

At its mid-term policy review session in March 2009, the Government recorded the need to take steps to develop the effectiveness evaluation of policy measures. The Prime Minister’s Office launched a project to prepare the issue (the POVI project). An interim report on the project was completed in November; in addition, the experiences of pilot projects have been described in a separate report.

The current final project report presents recommendations designed to improve the use of information in preparation and decision-making at Government level. The working group’s recommendations are closely linked with the project for developing the effective implementation and monitoring of the Government Programme, prepared under the leadership of the Prime Minister’s Office (the KOKKA project).

The working group’s recommendations are divided into four categories:

1) Research and evaluation plan for the Government term

3) Changes in modes of operation and the operating culture

The work has been supervised by the Prime Minister’s State Secretary, and the ministerial working group on better regulation has been kept abreast of the work. Both general evaluation competence and expertise in various impact assessments were represented in the composition of the working group.

The working group delivers this report for utilisation when defining procedures in support of political decision-making during the next Government term. The working group encourages broad discussion of the recommendations. Developing the effectiveness evaluation of policy measures is long-range work, which has already been promoted during several Government terms. It is important to link evaluation data with decision-making as closely as possible. Procedures and tools need to be developed, but it also means that the culture for preparing policy measures is developed and dialogue gains a more prominent role in the work process. Realisation of the project’s recommendations would involve a shift to more systematic use of information.