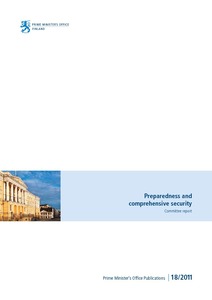 Prime Minister’s Office Publications 18/2011
This publication is copyrighted. You may download, display and print it for Your own personal use. Commercial use is prohibited.
Näytä kaikki kuvailutiedot
Tweet

The committee responsible for this report was set up to prepare a comprehensive report on preparedness in
society. The work was based on proposals presented in 2009 in the Government Security and Defence Policy
Report which called for a reassessment of the present comprehensive defence approach, the Strategy for
Securing the Functions Vital to Society, the Internal Security Programme as well as their content, arrangements,
lines of authority, responsibilities and implementation.
Finland’s preparedness arrangements are in no need of major reform. As the operating environment and
threat scenarios change, preparedness must be based on the broadest security thinking possible, that of
comprehensive security, and on harnessing the resources of the whole of society. In preparedness, better
account should be taken of the stronger role played by the business sector and the significance of nongovernmental
organisations. Further steps are also necessary to increase co-operation as the reform of the
state regional administration and municipalities continue.
The committee aims at eliminating overlaps in operations and improving co-operation. Confidence increases if
normal statutory powers are maintained in preparedness and the management of disruptions. Attention is paid
by the committee to the development of situation awareness and opportunities to obtain correct, immediate
information serving preparedness.
The committee emphasises the principles of representative democracy and considers the reporting procedure
an essential instrument to laying down Finland’s security and defence policy guidelines. It is necessary to set a
goal-oriented schedule for the preparation of reports. The Government Report on Security and Defence Policy
be complemented with a new report of narrower or broader scope, depending on the situation. Adoption of a
comprehensive approach to security entails extending the scope of the reports to include the examination of
new types of security issues.
The committee proposes that the operating preconditions of the Cabinet Committee on Foreign and Security
Policy should be strengthened, while recognising the importance of joint meetings between this Cabinet
Committee and the President of the Republic. The Minister of the Interior should also become a member of the
Cabinet Committee on Foreign and Security Policy. The committee also proposes that the Cabinet Committee
on Foreign and Security Policy should organise open seminars on comprehensive security.
The Security and Defence Committee should be renamed as the Security Committee and be strengthened by
broadening its base. The preparation of security affairs should be developed by strengthening the status of the
Security Secretariat, under the Security Committee. The committee sees no need to establish a separate security
council.
Close cooperation, in line with the committee’s proposals, between the authorities, the business sector, nongovernmental
organisations and individual citizens bolsters collective responsibility.