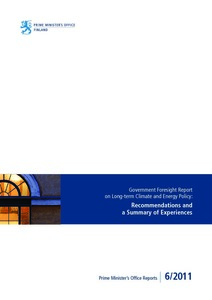 Prime Minister's Office Reports 6/2011
This publication is copyrighted. You may download, display and print it for Your own personal use. Commercial use is prohibited.
Näytä kaikki kuvailutiedot

This synthesis report summarises the external (PMO 3/2011) and internal assessments of the foresight report and related recommendations. The foresight report was submitted to Parliament in autumn 2009. The assessments find the report and the ensuing background material both comprehensive and broad-based in nature. They provide basis for rational public discussion and political decision-making.

The foresight report scenarios chart possible paths towards a low-carbon Finland over the next 40 years. The report also suggests a great number of measures with which to make Finland a leader in climate and energy policy. According to assessments, there were deficiencies in the treatment of economic impacts of climate and energy policy, and the connection to the development of the rural areas was regarded as too weak. It would also have been advisable to define in greater detail the possible paths towards long-term goals. Citizen participation in the foresight reporting process was commended. The assessments support the drawing up of foresight reports in the future, too.