What will the EU become when it grows up? - young people's visions on the future 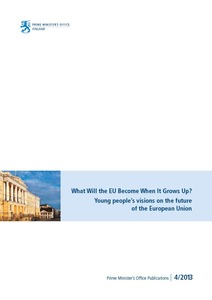 Prime Minister's Office Publications 4/2013
This publication is copyrighted. You may download, display and print it for Your own personal use. Commercial use is prohibited.
Näytä kaikki kuvailutiedot

What Will the EU Become When It Grows Up? Young people’s visions on the future of the EU’ is a statement depicting how the European Union would ideally look in 20 years’ time. It comprises three main themes: Finland’s role in the EU and the EU’s global role, structures and institutions, and the European identity and participation among young people. These themes are expressed through ten visions.

While the statement sees much room for improvement in the EU, the Union is also viewed as the solution to many problems. The EU must become more democratic, strengthen its social aspects and engage in deeper, more extensive integration. Finland has a great deal to offer European cooperation. European citizenship is based on common values, a shared culture and interaction between people. The statement regards the realisation of intergenerational justice within the EU as vital to participation by young people. Universally available education will create trust in the future, as well as strengthening expertise. In terms of the economy, practices should be further harmonised and the European Central Bank should be accorded a stronger role. In environmental matters, a vision is offered of the EU as a trailblazer that fulfils its global responsibilities across a broad front of policy areas.