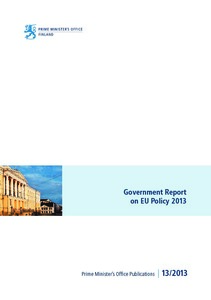 Prime Minister’s Office Publications 13/2013
This publication is copyrighted. You may download, display and print it for Your own personal use. Commercial use is prohibited.
Näytä kaikki kuvailutiedot

The Government Report on EU Policy 2013 focuses on the benefits and challenges of European
integration, lays down guidelines for Finland’s EU policy and discusses key development projects
intended to foster the Union activities. The report puts forward the proposals on the basis of
which Finland will seek to improve the Union, not only for EU citizens but also for European
business and working life. Finland is committed to the single currency, strengthening the
Economic and Monetary Union and supporting closer integration. The European Union must
act in ways that its citizens feel they can support. A stronger, more unified and fairer Union will
best serve the interests of Finland and its citizens. Key development areas include efforts with
which to ensure respect for the Union’s values and rules; strengthen the Economic and Monetary
Union; improve competitiveness, growth and employment, and the social dimension; develop a
common energy policy; combat climate change; promote the free movement of people; enhance
the Union’s external actions; and foster enlargement. In future, it will remain important to
maintain the Union’s unity. The report also examines Finland’s EU policy mechanisms, and the
ways in which Finland has an influence and promotes its interests within the EU. To attain the
established objectives, Finland’s existing system of coordinating EU issues must be strengthened
by developing the current procedures and making better use of resources.