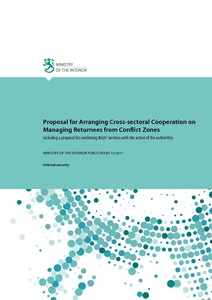 An exceptionally high number of people from inside and outside Europe and from Finland have travelled to the conflict area in Syria and Iraq. While some have travelled to the area to participate in armed combat, others, at least at the time of their departure, may have had other motives. Some of the travellers are ‘foreign terrorist fighters’, but even women, children and entire families have travelled to the area. The returnees addressed by the report are Finnish citizens, people possessing both Finnish and another country’s citizenship (dual nationals) or those holding valid residence permits in Finland. There are no legal grounds to prevent such people from returning to Finland. The report presents an operating model which aims to reduce the risk of violence associated with the returnees from the conflict zone and which is based on using criminal law measures and other means. The reasons for the risk of violence are diverse. Some of the returnees have received training for and participated in armed combat or have lived in a violent environment and witnessed violent action. Some may be traumatised or suffer from post-traumatic stress disorder. Children may have been indoctrinated into a violent ideology. The model is based on cross-sectoral cooperation which also includes the services provided by non-governmental organisations. The risk of violence regarding each returning individual will be assessed. Following this, the appropriate measures will be implemented