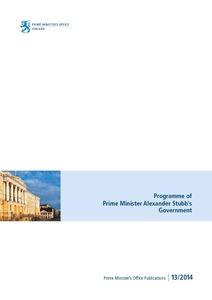 Prime Minister’s Office Publications 13/2014
This publication is copyrighted. You may download, display and print it for Your own personal use. Commercial use is prohibited.
Näytä kaikki kuvailutiedot

Strong public finances are a prerequisite for sustainable well-being. Closing the sustainability gap in public finances requires structural reforms, the strengthening of conditions for growth and employment, and the adjustment of central government finances. Implementing the Structural Policy Programme in the manner decided in August 2013 will be ensured as previously agreed through further decisions made, if necessary, in the budget session of summer 2014. The Structural Policy Programme agreed in August 2013, the General Government Fiscal Plan for 2015–2018 and implementation decisions clarifying them will be prioritised in the actions of the administrative branches during the remainder of the parliamentary term.