Cooperative and continuous foresight - a proposal for a national foresight approach 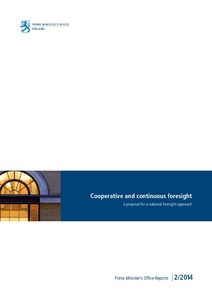 Prime Minister's Office Reports 2/2014
This publication is copyrighted. You may download, display and print it for Your own personal use. Commercial use is prohibited.
Näytä kaikki kuvailutiedot

On 3 June 2013 the Prime Minister’s Office launched a project for a foresight model, as part of the Government Report on the Future. The aim was to build a national foresight approach which would provide elements contributing to Finland’s competitive edge and its role as a pioneer. The purpose of the project was to address long-term foresight needs and objectives, parties, actors, interfaces, the work cycle, time periods studied, methods, procedures and costs, and to explore the potential need to alter the division of responsibilities between various actors.

The aim of the national foresight approach is to provide Finnish decision-makers with the best possible perspectives into the future, while enabling the public administration to create a basis for shaping the future by providing shared operating approaches and forums for foresight activities. Closer cooperation and shared processes between foresight actors could improve the effectiveness of foresight activities and raise the pace at which foresight information passes through the strategy stage into practice. Implementation will be expedited through trials which could be launched already in the foresight phase.