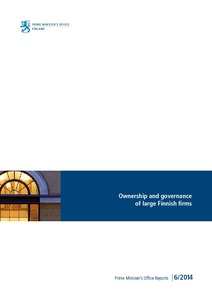 Prime Minister’s Office Reports 6/2014
This publication is copyrighted. You may download, display and print it for Your own personal use. Commercial use is prohibited.
Näytä kaikki kuvailutiedot

In this report, we study the ownership structure of large Finnish firms. We make an overview of the evolution of corporate ownership in Finland from the 1970s to today, and contrast the Finnish setting to international patterns of ownership. Factors that make the Finnish ownership field different from most Western countries include large government involvement, and a significant role of co-operatives. We also note that while the role of local banks was very significant, it diminished quickly upon the Finnish banking crisis in the early 1990s, and subsequent regulatory changes. The disappearance of banks as owners seems to have resulted in a power vacuum in Finnish listed firms.

While the general lack of capital seems to plague the Finnish corporate sector, we note a specific need for anchor owners, in other words owners who hold a significant proportion of the firm’s shares, and who are actively involved in the firm and can thus be seen as owners, instead of merely as investors.

Among our policy implications, we see a need for an improved investing climate in Finland. The goal should be to make Finnish firms attractive in the eyes of both domestic and foreign investors. The government’s large role as owner should, in our view, be reduced. However, changes in government’s role need to be viewed as a long term goal, as hasty actions are likely to cause severe side effects. From the point of economic efficiency, the co-operative form is not optimal for a dynamic, integrated, and fast-changing world. Supporting migration from co-operatives to corporations should thus be considered. Institutions play a large role in corporate ownership throughout the world.

We argue that the model of dispersed ownership and large institutional ownership with no active voice works less well in Finland, compared to the Anglo-American countries. Finland should consider ways in which the power of the corporate management team could be solidified, for management to have a better footing to pursue long term policies. Finally, the Finnish stock market needs to be made more attractive. A wider participation in the stock market would have wide spread positive effects to the economy.