Implementation of the Paris Agreement and tasks to develop its rulebook 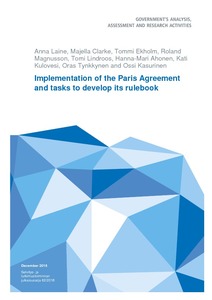 Implementation of the Paris Agreement and tasks to develop its rulebook.pdf (2.023Mt)
Lataukset:

Valtioneuvoston selvitys- ja tutkimustoiminnan julkaisusarja 62/2016
This publication is copyrighted. You may download, display and print it for Your own personal use. Commercial use is prohibited.
Näytä kaikki kuvailutiedot

At the Paris climate conference (COP 21) in December 2015, the first global climate agreement was adopted, under which all Parties participate in climate change mitigation through nationally-determined contributions (NDCs). The first round of negotiations concerning the implementation of the Paris Agreement was held in Bonn, Germany, in May 2016. During this meeting, the three subsidiary bodies – the SBI, SBSTA and APA - launched discussions on how to create the necessary rules, modalities and procedures to implement the Paris Agreement. This work continues as the three bodies meet in context of COP 22 in Marrakech, Morocco, in November 2016.

This report assesses the tasks to create the rules related to all key parts of the agreement: mitigation and adaptation, climate finance, transparency, land use and forestry, technology, capacity building, cooperative approaches, loss and damage as well as facilitating implementation and compliance. In addition to describing the tasks for each topic, the report analyses the role of Finland in implementing the Paris Agreement, and how Finnish know-how can be used in enhancing climate action worldwide.