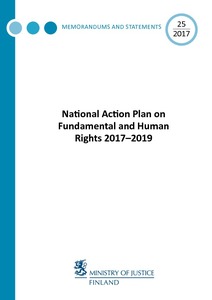 Publication of the Ministry of Justice 25/2017
This publication is copyrighted. You may download, display and print it for Your own personal use. Commercial use is prohibited.
Näytä kaikki kuvailutiedot

In preparing the Action Plan, particular note has been taken of the Human Rights Report’s policies, the recommendations to Finland from international treaty monitoring bodies, the Government Programme’s policies, the views of the overseers of legality and the special ombudsmen, as well as the areas of concern raised by non-governmental organisations. The legal basis of the Action Plan is constituted by the basic rights and liberties guaranteed in the Constitution, the international and regional human rights treaties ratified by Finland as well as the Charter of Fundamental Rights of the European Union.