OECD/IMHE - Supporting the contribution of higher education institution to regional development : Self-evaluation report of the Jyväskylä region in Finland 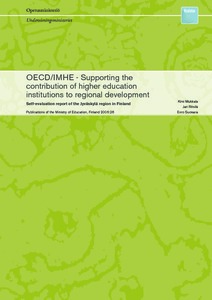 Publications of the Ministry of Education, Finland 2006:26
This publication is copyrighted. You may download, display and print it for Your own personal use. Commercial use is prohibited.
Näytä kaikki kuvailutiedot
Tweet

Together with 13 other regions from different OECD countries the Jyväskylä region is participating in the project that aims to boost regional contribution of higher education institutions (HEIs). The overall project Supporting the contribution of HEIs to regional development is coordinated by the OECD programme on Institutional Management of Higher Education (IMHE). As a part of the regional development process a cooperative self-evaluation, which gathers together the HEIs and their stakeholders, has been launched in each region. This is followed by the review visit of an international review team which aims to further support the regional learning process. In the Jyväskylä region all central actors were participating in the self-evaluation process and content of this report is based on their viewpoints on prevailing situation and potential focal points for development. The regional steering committee consists of representatives from the University of Jyväskylä, Jyväskylä Polytechnic, Regional Council of Central Finland, City of Jyväskylä, Jyväskylä Regional Development Organization (JYKES), Jyväskylä Science Park, Federation of Central Finland’s Enterprises, Central Finland Chamber of Commerce and the Ministry of Education. The member organizations of the steering committee participated also in the funding of the project. In addition, the expertise of the State Provincial Office of Western Finland and Employment and Economic Development Centre of Central Finland was used in the process.

The self-evaluation process of the Jyväskylä region was coordinated by the Expert Division of the University of Jyväskylä. The main objective of the self-evaluation was to produce a versatile description about the contribution of HEIs to the development of the Jyväskylä region, and ­practical information on possible bottlenecks of the process and potential development fields. The self-evaluation is basically intended for the support of learning and development process. Interaction between the HEIs and their regional stakeholders was analyzed and processed through interviews, questionnaires, workshops and work of the regional steering committee. Within the HEIs the evaluation data was gathered from the central management, management of different units (faculties, schools, separate units), experts of different themes and from the development personnel. In regard to stakeholders the interviews were mainly directed to the leadership of organizations and thematic experts.