Footprints in the Snow. The Long History of Arctic Finland 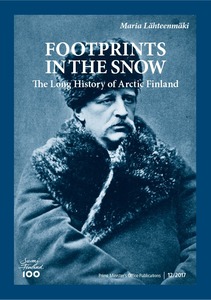 Finland’s geographical location and its history in the north of Europe, mainly between the latitudes 60 and 70 degrees north, give the clearest description of its Arctic status and nature. Viewed from the perspective of several hundred years of history, the Arctic character and Northernness have never been recorded in the development plans or government programmes for the area that later became known as Finland in as much detail as they were in Finland’s Arctic Strategy published in 2010. As a consequence of international geopolitical and economic turns Finland has also moved closer to the Arctic. At the same time, Finns have gradually accepted Northernness as part of their regional and national identity. The work presents and evaluates Finland’s Northern nature over a long historical time span. The texts focus on how Northernness has been seen, on the one hand in scientific work, and on the other in political speeches and practices. Finland, which will have been independent for one hundred years in 2017, wants to be an active operator in the Arctic region. It is looking to the North for growth, competitiveness and employment while respecting the Arctic environment. The writers of this reference book are experts in Northernness in their respective fields and come from different universities and central government