Innovation activity in the ESF projects of Central Finland, Päijät-Häme, and Satakunta : Third intermediate report of the ALUEOSAAJA project 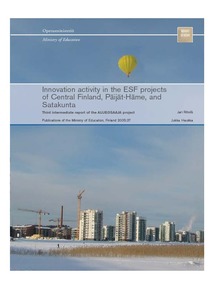 Publications of the Ministry of Education, Finland 2005:37
This publication is copyrighted. You may download, display and print it for Your own personal use. Commercial use is prohibited.
Näytä kaikki kuvailutiedot

The European Social Fund (ESF) contributes to the implementation of the Lisbon strategy (2000) on the EU level. In accordance with the strategy, the objective of the member states is to be at the top of the development of the knowledge-based society by the end of the decade. The promotion of innovation activity, in particular, is seen as a cornerstone in the attainment of the objectives. In the Finnish ESF frame of reference and the programming documents applying it, great expectations have been placed on the activities as regards both the innovative methods developed in the projects and the promotion of the innovation system. However, the reviews of ESF activities have not been able to provide a good account of to what extent project activities have fulfilled these expectations.

The current, third intermediate report of the project for the development of regional know-how and structural fund projects (ALUEOSAAJA) adheres to the essence of the Lisbon strategy. The intermediate report aims to answer the following questions: (1) What kind of innovations arise in ESF projects, where do they come from, and how are their diffusion and continuity secured? (2) How are ESF projects connected to the development of the regional innovation system, and what role do the implemented interventions have in them? (3) How can the production of innovation in ESF projects and the role of ESF projects in the innovation system be further strengthened?