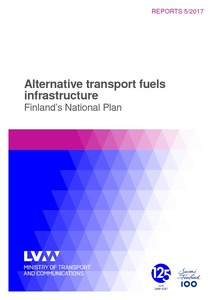 Reports 5/2017
This publication is copyrighted. You may download, display and print it for Your own personal use. Commercial use is prohibited.
Näytä kaikki kuvailutiedot

Directive 2014/94/EU of the European Parliament and of the Council on the deployment of alter-native fuels infrastructure entered into force in October 2014. According to the Directive, all Member States must draft a national policy framework for the development of an alternative transportfuel market and deployment of a related infrastructure by November 2016. The national policy framework must specify the alternative transport fuels and their distribution infrastructure targets for 2020 and 2030 as well as the measures by means of which the targets will be achieved.

The Finnish Government accepted the National Alternative Fuels Plan in February 2017. According to the plan, the distribution station network of different fuels and the public charging points required by electric vehicles be built in Finland primarily on a market basis. Commercial operators, such as energy companies, shopping centres and parking operators, would primarily be responsible for construction of the infrastructure. The most profitable areas, i.e. large and medium urban regions, would be built first. Other areas and measures for their construction will be assessed by no later than 2020.

It has been estimated in Finland, that even if the distribution network were to be constructed on a market basis, numerous new measures would have to be taken in order to open alternative fuel markets. The most important of these measures are amendments to the Act on the Promotion of the Use of Biofuels for Transport, the use of existing economic instruments (e.g. car, motor vehicle and fuel tax, energy subsidies), a procurement subsidy for new technologies, developing the taxation of company car benefits, making use of public procurements, developing information guidance, exerting influence at the international and EU level as well as research and development.

This is the English version of the Finnish report number 4/2017.