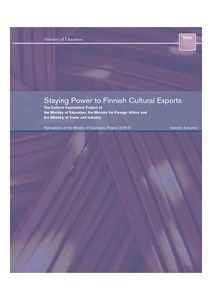 Publications of the Ministry of Education 2005:9
This publication is copyrighted. You may download, display and print it for Your own personal use. Commercial use is prohibited.
Näytä kaikki kuvailutiedot
Tweet

Meaning-intensive production and creative economy are emerging as crucial assets in international competition.

Many countries revised their cultural exportation strategies in the 1990s, adopting the creative economy sector as a key strategy in international competitiveness.

The weak points in our cultural exports are leakage points in the value chain, information, marketing, promotion, and lack of a strategy and coordination in cultural exportation. The structure of the cultural industry is not competitive. What is needed is more entrepreneurship and business know-how and the management of immaterial rights. Another weakness is the lack of capital and inadequate support for cultural exports.

The measures and input proposed in this report and in the cultural exportation development programme 2005-2010 make for concrete cultural, ethical, social, employment and economic results. As an attractive area of creative economy, Finland will draw top doers, whose input will generate creative capital - a positive circle or vortex of creativity.