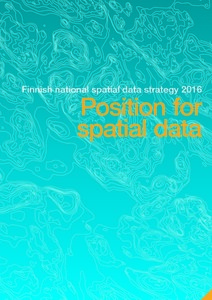 The Finnish national spatial data strategy 2010–2015 was published in autumn 2010. The previous strategy for 2005–2010 had been published in 2004. The national spatial data strategy has now been updated. The strategy group felt that there was no need to renew the previous strategy entirely. Previously recorded objectives are still valid. The measures proposed are, this time around, more concrete and they have been broken down into tasks and responsible parties have been named.