FAO State of the Forest Genetic Resources in Finland 2011 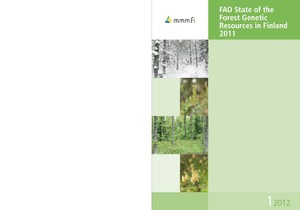 Publications of the Ministry of Agriculture and Forestry 1/2012
This publication is copyrighted. You may download, display and print it for Your own personal use. Commercial use is prohibited.
Näytä kaikki kuvailutiedot

The Food and Agriculture Organization of the United Nations (FAO) has recognised the value of genetic resources in agriculture and forestry for decades. At its Eleventh Regular Session, the FAO Commission on Genetic Resources for Food and Agriculture acknowledged the urgent need to conserve and sustainably utilise forest genetic resources to support poverty alleviation and environmental sustainability. As a practical measure, the Commission approved the inclusion of forest genetic resources in its Multi-Year-Programme of Work. It also agreed to the preparation of a country-driven first report on the State of the World’s Forest Genetic Resources.

Finland recognises the role of genetic resources in sustainable forest management as well as in the use of forest for the benefit of people, through both traditional wood production and various ecosystem services. Finland welcomes the active role the FAO has taken by preparing a global status report on forest genetic resources.

Although the conservation of genetic resources has been regularly monitored at the international level, the FAO initiative entitled The State of Forest Genetic Resources in Finland is the first report that comprehends the various aspects of management and conservation in a wider framework. The process of preparing the country report has been a fruitful exercise for the national stakeholders, extending the thinking beyond the traditional gene conservation work done by the Finnish Forest Resource Institute (Metla).