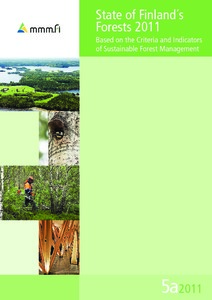 Publications of the Ministry of Agricultural and Forest 5a/2011
This publication is copyrighted. You may download, display and print it for Your own personal use. Commercial use is prohibited.
Näytä kaikki kuvailutiedot
Tweet

Ever since the Second Ministerial Conference on the Protection of Forests in Europe (MCPFE) in Helsinki in 1993, Finland has made an active contribution to the development of the criteria and indicators worldwide. The first set of Pan-European Criteria and Indicators for Sustainable Forest Management was produced in 1993–1995 under the leadership of Finland and Portugal. Finland’s first national set of indicators was completed in 1996 and has since been updated. The Pan-European Criteria and Indicators currently applied is based on the decisions of the Ministerial Conference held in Vienna in 2003.

The present criteria-based and indicator-based report, State of Finland’s Forests 2011, is the fourth of its kind; previous reports were published in 1997, 2003 and 2007. The report has been revised in the same spirit of open cooperation as the National Forest Programme. It has been discussed and commented on by the Advisory Board for International Forest Policy appointed by the Ministry of Agriculture and Forestry. The collation of data for indicators and the production of texts were done at the Finnish Forest Research Institute (Metla), which, being in charge of the national forest inventory and of compiling forest statistics in Finland, has the necessary resources for the task.

The Finnish set of indicators is lent considerable weight by monitoring data on Finland’s forests from time series up to 90 years old and by the taking of new, topical issues under review. Because the indicators are also used for presentation of and reporting on Finnish forests and forestry internationally, the present report also includes a short description of the development and diversity of Finnish forests and forest management and their significance to Finnish society. In addition the main characteristics of Finland’s forests have been compared to the European situation.

I would like to extend my warmest thanks for those contributing to this report for a job well done. At the same time, I hope that its valuable content will be extensively used to communicate the state of Finland’s forests and forestry during and after during the International Year of Forests 2011.