Management and Steering of Higher Education in Finland 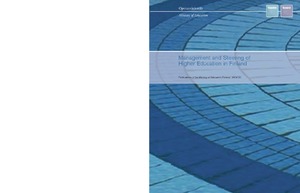 Publications of the Ministry of Education 2004:20
This publication is copyrighted. You may download, display and print it for Your own personal use. Commercial use is prohibited.
Näytä kaikki kuvailutiedot
Tweet

The provision of higher education in Finland is extensive. The annual student intake in higher education is equivalent to about 65% of the average size of the 19–21 age group. In 2003 there were about 174,000 degree students in universities, 83,000 in open university and over 129,000 in polytechnic degree programmes.

All Finnish universities are government-run institutions and primarily financed from the state budget. The universities have extensive autonomy. The polytechnics are either municipally or privately run and co-financed by the government and local authorities.

Parliament passes educational legislation and decides on the overall lines of education and research policy. The universities are governed by the Universities Act and polytechnics by the Polytechnics Act. Each field of study in universities is governed by a separate decree. Legislation concerning the university degree structure is being revised to enable the new two-cycle degree structure to be adopted on 1 August 2005. The main policy guidelines and development targets are determined at a general level in the Development Plan for Education and Research which is adopted by the Government for a six-year period every four years. Performance management and target outcomes constitute the most important tool for the Ministry of Education in steering the operations of the universities and the polytechnics. This is strategic steering which implements the national higher education policy.

The national science, technology and innovation policies are formulated by the Science and Technology Policy Council, which works under the Prime Minister. The authorities primarily responsible for science and technology policy are the Ministry of Education and the Ministry of Trade and Industry. The Ministry of Education is in charge of matters relating to education and science policy, institutions of higher education, and the Academy of Finland. The Ministry of Trade and Industry deals with matters relating to industrial and technology policies, the National Technology Agency Tekes and the Technical Research Centre of Finland VTT. Nearly 80% of government R&D funding is channelled through these two ministries.

The Academy of Finland is in change of research administration and finances most university research. The Academy has four research councils, appointed for three-year terms, each financing research in its disciplines. Another important task for the Academy is to evaluate research.