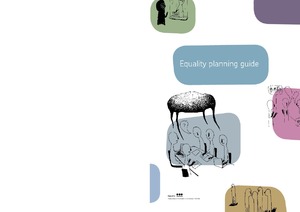 Ministry of the Interior publication 10/2010
This publication is copyrighted. You may download, display and print it for Your own personal use. Commercial use is prohibited.
Näytä kaikki kuvailutiedot

This guide has been produced to help authorities in their equality planning. It contains information on
legislation on equality, concrete examples of the equality plan drafting process, information on the
setting of objectives under the plan, the content of a plan and the structure of the plan document. The
guide also provides examples of issues relating to equality with regard to various groups. The guide
was produced by a work group set up by the Ministry of the Interior (SM003:00/2009). One of its tasks
was also to revise the general recommendations for equality plans. Representatives of different authorities,
NGOs, organisations involved in equality and gender equality issues, and self-government
bodies contributed to the work of the group. An electronic version of the guide is available at www.yhdenvertaisuus.
fi. The guide has been published in English, Finnish and Swedish.