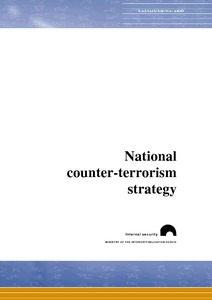 On 15 September 2009, Minister Anne Holmlund set up a working group to formulate Finland’s National Counter-Terrorism Strategy. The strategy was designed to define and clarify the roles and responsibilities of the various authorities involved in counter-terrorism action, and the possible coordination of such action as might prove necessary. The working group also had the task of setting national objectives covering the roles that authorities in different sectors were to have in combating terrorism and the factors leading to it. In addition, the working group was to weigh up the current terrorism situation, make a threat assessment and examine potential future trends in terrorist activity. Having done this, the group was to set out the key operational principles and identify areas where the law needed to be amended. The group’s term of office ran from 1 October 2009 to 14 January 2010.