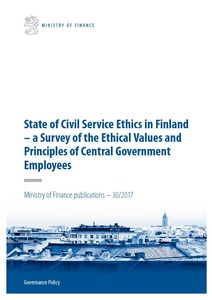 The Ministry of Finance has examined the values and principles of central government employees by means of surveys conducted in 1999 and 2007. The third survey on ethics carried out in November 2015 looked at central government employees’ views of the ethical values and principles related to their work. The survey was based on a recommendation issued by the Advisory Body on Civil Service Ethics (Ministry of Finance 3/2014). A citizen survey, whose results were published separately, was conducted in addition to the survey targeted at civil servants (Ministry of Finance 2/2017). The civil servant survey was addressed to the employees of 12 ministries and 16 government agencies as well as the top management of central government. The survey covered over 4,300 respondents on ministry level, 3,100 respondents on agency level and 400 respondents in the additional sample consisting of top management. A total of 939 responses were received from all branches and levels of government. A good number of responses, 229, were received from the top management. The survey also attracted 531 expert level responses. This was significant, as the expert perspective had been absent in earlier civil servant surveys. Even if the response rate was relatively low (12%), the survey collected the largest set of data on civil service ethics so far. The civil servant survey looked at different aspects of civil service ethics: the change of values in central government, the principles of civil service ethics, situations that present ethical problems as well as different means by which a high level of civil service ethics could be maintained and improved. The survey highlighted the continuity of civil service values and principles but also uncertainties associated with certain new phenomena