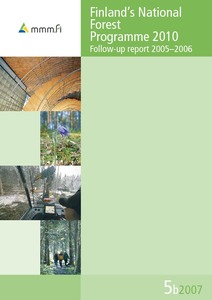 Publications of the Ministry of Agriculture and Forestry 5b/2007
This publication is copyrighted. You may download, display and print it for Your own personal use. Commercial use is prohibited.
Näytä kaikki kuvailutiedot

2005 was an unusual year for production in the forest industry, owing to the seven-week long dispute over contracts of employment in the paper industry. In 2006, thanks to a healthy market and a new collective agreement, production of pulp, paper and cardboard rose to a new record. The target to double the value of exports in the wood products industry set in the National Forest Programme is not being reached. A more positive trend is reflected in the fact that domestic use of the wood products industry remains at a high level and that the degree of processing (quality grade) of wood products is rising.

The consumption of roundwood in industry decreased to 67.8 million cubic metres in 2005. The consumption of wood in industry rose in 2006 to 54.6 million cubic metres. The volumes of imported wood in both years were high owing to low prices and reduced availability on the domestic market of certain timber grades. Unless special measures are introduced, the logging outturn target for domestic wood (including firewood) in the Forest Programme of 63−68 million cubic metres a year will not be achieved. Roundwood prices have been climbing since 2005. At the same time, the real profitability of forestry (net income per hectare) fell to 86 euros in 2006.

Employment trends in the forest sector have been more favourable than what was forecast when the National Forest Programme was being drawn up. The healthy situation regarding employment is due to increased silviculture (forest management), the increase in the harvesting of forests for energy and steady employability in the wood products industry.

The implementation of the Forest Biodiversity Programme for Southern Finland (METSO) continued successfully. In early 2005 Finland’s National Strategy for Adaptation to Climate Change appeared and in 2006 the Programme for Research into Adaptation to Climate Change 2006−2010 was initiated. In 2005 the positive trend that had long been conspicuous in silviculture and basic improvements to forests came to a halt. The tending of seedling stands and ditch cleaning and supplementary ditching declined, due to a fall in the real value of aid under the Finnish Act on the Financing of Sustainable Forestry as well as the repercussions of the weak market in wood. In contrast, the overall use of forest chips has risen in accordance with the objectives set out in the National Forest Programme and reached approximately 3.4 million cubic metres in 2006. The complete reform of the Act referred to was also concluded and the Act was passed in January 2007.

The idea of forests for recreational use has continued to grow, with support coming from such agencies as the Outdoor Forum of Finland and through the implementation of the VILMAT Programme and the development of e-services. There has been closer co-operation between R&D and training. The availability of a professionally skilled workforce has become a more important issue than before. International co-operation on forests has continued to be dynamic. The Regional Forest Programme work and the work of the Forest Councils have continued to develop favourably. The new Regional Programmes for the period 2006−2010 were drawn up in 2005. Co-operation between the National Forest Council and the Regional Forest Councils has become closer.