Management Plan for the Finnish Seal Population in the Baltic Sea 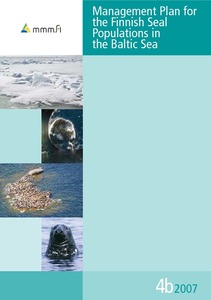 2007_4b Management Plan for the Finnish Seal Populations in the Baltic Sea.pdf (1.037Mt)
Lataukset:

Publications of the Ministry of Agricultural and Forest 4b/2007
This publication is copyrighted. You may download, display and print it for Your own personal use. Commercial use is prohibited.
Näytä kaikki kuvailutiedot
Tweet

The Baltic grey and ringed seals are considered game species in Finland, and are thus under the responsibility of the Finnish Ministry of Agriculture and Forestry. At the regional level, the game management districts are responsible for seal management. The districts are the regional administrative units of the Finnish game administration, and at the same time the statutory organisation of hunting bodies. The Government of Åland has the responsibility for the management of seal populations in the autonomous Province of Åland.

In the last decades, the grey seal population has increased dramatically. The ringed seal population has also grown abundant, although the growth has not been as fast. Improvement in the reproductivity and the general health status of seal populations, and the resulting increased numbers, is a positive phenomenon. The utilisation of seals as a natural resource, and the development of diverse uses for seal products are increasing. The growing number of seals has called for a systematic management of their populations. Damage by seals to fishing gear and fish catch has increased dramatically, as have demands of regulating the populations. Attitudes towards seals have hardened as a result of financial losses sustained by fishermen. The grey seal, in particular, is regarded as a threat to the fishing industry in many places. As seals do not recognise national borders thus are shared among the Baltic Sea countries, the management of the seal populations is subjected to conflicting views and objectives at both a national and an international level.

The management plan for the seal populations in Finland was drawn up applying the Convention on the Conservation of European Wildlife and Natural Habitats, recommendations No 59 (1997) and No 74 (1999) of the Permanent Council, the principle of sustainable use advocated by the World Conservation Union (IUCN), and the obligations under the EU’s Habitats Directive. This way, Finland’s international obligations regarding the management of seal populations have been considered. As a part of the management plan process, a hearing of the opinions of local people, regional actors and national stakeholders was conducted.

The management of the seal populations will be implemented through the joint impact of a variety of measures discussed here. Measures are proposed for regional population management, conservation of seals and conservation areas, seal hunting and hunting surveillance, utilisation of seals as a resource, prevention of damage and compensation, population monitoring and research, training, advice and guidance, information services, cooperation between different actors involved, updating the management plan and responsibilities for population management. The measures to be carried out will take into consideration economic, social and cultural requirements as well as special regional and local features. The implementation of the plan will be monitored and updated as necessary.