Management Plan for the Lynx Population in Finland 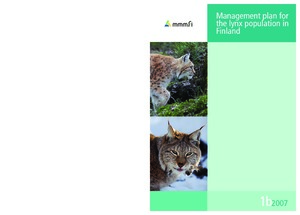 Publications of the Ministry of Agricultural and Forest 1b/2007
This publication is copyrighted. You may download, display and print it for Your own personal use. Commercial use is prohibited.
Näytä kaikki kuvailutiedot
Tweet

The objectives set for lynx population management are to a certain extent conflicting, both on national and international levels. The Management Plan for the Lynx Population in Finland was drawn up applying the Convention on the Conservation of European Wildlife and Natural Habitats, Recommendations of the Standing Committee No 59 (1997) and No 74 (1999) as well as the IUCN’s principle of sustainable use and on the obligations laid down in Council Directive 92/43/EC on the protection of natural habitats and wild flora and fauna (the Habitats Directive), so as to fulfil the international obligations placed on Finland. In drawing up the management plan there was a broad hearing of local people, regional actors and national stakeholder groups.