Government Report to the Parliament on Food Safety 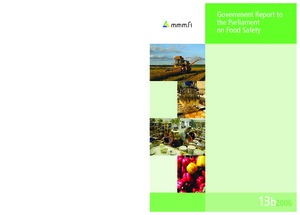 Publications of the Ministry of Agriculture and Forest 13b/2006
This publication is copyrighted. You may download, display and print it for Your own personal use. Commercial use is prohibited.
Näytä kaikki kuvailutiedot
Tweet

The safety of foodstuffs produced and consumed in Finland is of a high standard. Safety is created through action of the whole chain. The main requirements regarding food safety are laid down by law. These are supplemented by the sector’s own quality and safety systems. So far, however, the objectives of the national food safety work have not been written down to a document that is dealt with broadly on the political level.

Food safety must be ensured in the increasingly international context. Food trade is growing, consumer expectations are changing and outbreaks are more easily spread around the world. Food trade has been facilitated by creating systems that aim to harmonise the national norms concerning food quality and safety. Finland is bound by the EC legislation as well as agreements concluded in the context of the World Trade Organization WTO. The Agreement on the Application of Sanitary and Phytosanitary Measures SPS requires that the norms relating to food safety rest on a scientific basis and impede trade as little as possible. Each country may select an appropriate level of protection, ALOP, according to which the national safety norms and those for imported foodstuffs are established.

In recent years the food legislation has undergone a comprehensive and quite fundamental reform. The amendments highlight the role of risk management of the operators in the food sector, i.e. their own-checks, in ensuring safety and quality. The planning of the control is enhanced and the control is targeted at specific risks. The central authorities in the food chain have been combined into
the Finnish Food Safety Authority Evira, which got started on 1 May 2006.

According to a Government Resolution on the development of food control of 30 October 2003 (point 7), a report on food safety, assessing the state and development of food safety in Finland from the perspective of the whole food chain, is to be submitted to the Parliament once during each electoral period.
The purpose of the food safety report is to describe the state of food safety in Finland, present the main indicators for this and identify the measures through which the standard of food safety can be improved or at least maintained in Finland. The report also lays the foundation for setting the food safety targets regarding the main hazards, which are then given as the ALOP values referred to
in the SPS Agreement.

Meeting the objectives presented in the report calls for action all through the food chain. The State measures are undertaken within the budget framework for the State economy. The nutritional quality of foodstuffs is one of the most important factors in view of the consumers’ health. However, this report does not deal with nutritional quality, because this aspect is addressed in the Report on Social Affairs and Health submitted to the Parliament every four years as supplementary material to the Government Annual Report. In recent years the Government has also adopted a number of programmes and strategies relating to food safety, such as the National Programme on Hazardous Chemicals and Consumer Policy Programme for 2004–2007.