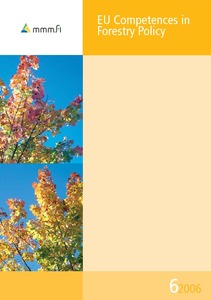 Publications of the Ministry of Agriculture and Forestry 6/2006
This publication is copyrighted. You may download, display and print it for Your own personal use. Commercial use is prohibited.
Näytä kaikki kuvailutiedot

The present paper is an abridged version of the research report published on 30 June 2004 as an outcome of the research agreement between the Finnish Ministry of Agriculture and Forestry and the Institute of International Economic Law of Helsinki University (KATTI). Researchers based at the Pellervo Economic Research Institute (PTT) and at the Faculty of Forestry in the University of Joensuu (in Eastern Finland) have also contributed to this project.

This Report concerns forestry-related regulation within the European Union. It was prompted by a proposal, presented in the spring of 2004, advocating the inclusion of a legal basis for forests and forestry in the Draft Treaty establishing a Constitution for Europe. The Report therefore first discusses the relevant provisions of the existing Treaties before analysing future developments in the light of the new Draft Constitutional Treaty (the version of 18 July 2003). Finally it offers several scenarios outlining the potential effects of new forms of Union-level regulation on Finnish forestry policy. In devising the most likely scenarios, the focus has been on the contents of the “Forestry proposal” and on the impact of its possible adoption. EU competences in forestry policy are, however, also discussed in a much broader context.

Focusing on an analysis of the EC/EU Treaties, the Report draws on the expertise of the researchers from the relevant policy sectors. The bulk of the work consisted of meetings of the research team. The final Report has been compiled by Kai Kokko, LL.D., a researcher at the Institute of International Economic Law (KATTI) of the University of Helsinki.