Management Plan for the Wolf Population in Finland 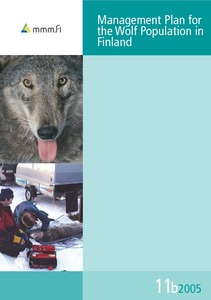 Publications of the Ministry of Agriculture and Forest 11b/2005
This publication is copyrighted. You may download, display and print it for Your own personal use. Commercial use is prohibited.
Näytä kaikki kuvailutiedot
Tweet

The management plan for the wolf population in Finland was prepared in compliance with the obligations of Recommendations 59 (1997) and 74 (1999) of the Standing Committee of the Convention on the Conservation of European Wildlife and Natural Habitats, the sustainable use principle of the World Conservation Union (IUCN) and the obligations of Council Directive 92/43/EEC on the conservation of natural habitats and of wild fauna and flora (known as the Habitats Directive) so as to fulfill the international obligations placed on Finland concerning management of the wolf population. During the various stages of preparation of the management plan, local people, regional stakeholders and national interest organizations were extensively heard.

The management plan for the wolf population in Finland is divided into two main parts. Part 1 sets the background for the Finnish Ministry of Agriculture and Forestry’s policy concerning the wolf population. It describes the biology of the wolf and the status of the wolf population and compares the situation in Finland with international research where relevant. Part 1 also deals with topics such as national legislation, international obligations and forms of cooperation, the economic losses caused by wolves, the shared history of the wolf and man, previous aims of wolf population management, the nature of that management so far and sociological research into large carnivores. Further, Part 1 comprises research material drawn from the hearing procedure which is closely linked with the practical part of the plan, i.e. the actual management plan.

The practical management plan presents guidelines based on the biology of the wolf, on the one hand, but also on socio-economic facts that are considered important in this context on the other, all of which the Ministry of Agriculture and Forestry will apply in its continued systematic management of the wolf population in Finland. The fundamental aim of management is to maintain a favourable conservation status for the wolf population. This aim will be implemented through the combined effect of different measures. Measures are proposed for the management of regional wolf populations, the prevention of damage and its costs, compensation for damage, the granting of exceptions from the protection of wolves, monitoring the wolf population, research and how to develop it, the provision of training, advisory services and information, supervision of hunting, transplantation of wolves, wolf-dog hybrids, the potential of wolves in eco-tourism, diseases, cooperation among the various parties involved, how the management plan is to be updated and the allocation of responsibility for population management. The measures to be taken will take into account economic, social and educational demands and regional and local special features. Implementation of the plan will be monitored and the plan will be updated as necessary.