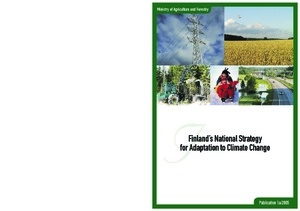 Publications of the Ministry of Agriculture and Forest 1a/2005
This publication is copyrighted. You may download, display and print it for Your own personal use. Commercial use is prohibited.
Näytä kaikki kuvailutiedot
Tweet

The Parliament’s reply to the National Climate Strategy submitted to the Parliament in March 2001 identified the need to draft a programme for adaptation to climate change. The preparation of the National Strategy for Adaptation to Climate Change was started in the latter part of 2003. The work was coordinated by the Ministry of Agriculture and Forestry and representatives from the Ministry of Traffi c and Communications, Ministry of Trade and Industry, Ministry of Social Affairs and Health, Ministry of the Environment, Ministry for Foreign Affairs, Finnish Meteorological Institute and Finnish Environment Institute took part in the preparation. Each Ministry was responsible for assessing the impacts and identifying adaptation measures in its own sector.

The Adaptation Strategy was based on the available research information and expert assessments and judgements. A large number of leading Finnish researchers of climate change and its impacts, other experts and representatives of different sectors were involved in the preparation process. The comments sent by stakeholders were also taken into account in finalising the strategy.

The increase in the greenhouse gas concentration in the atmosphere leads to global warming and changes in the climate systems. The Finnish Meteorological Institute compiled the climate change scenarios based on the existing international and national data. According to the estimates on the future climate change in Finland, by 2080 the average temperature could rise by 4 - 6°C and the average precipitation would grow by 15 - 25 %. Extreme weather events, such as storms, droughts and heavy rains, are likely to increase. The Government Institute for Economic Research drew up a background study on the long-term scenarios for the economy and the Finnish Environment Institute examined the future development trends in natural conditions.

The strategy describes the impacts of climate change in the following sectors: agriculture and food production, forestry, fisheries, reindeer husbandry, game management, water resources, biodiversity, industry, energy, traffic, land use and communities, building, health, tourism and recreation, and insurance. The strategy describes the present sensitivity to climate change and outlines actions and measures to improve the capacity and to adapt to future climate change. The strategy aims at reducing the negative consequences and taking advantage of the opportunities associated with climate change. The Adaptation Strategy includes a proposal on starting a research programme.

The Strategy for Adaptation to Climate Change was drawn up as a self-standing and comprehensive work. The main content will be included in the National Climate and Energy Strategy to be updated in 2005.