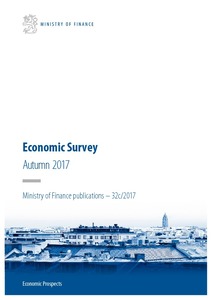 The Finnish economy is in a phase of rapid growth. In 2017, the Ministry expects the rate of economic growth to clearly outperform that of 2016, after which the projected growth rate will slow to a level of around 2%. According to the forecast, the Finnish economy will continue to show strong growth in 2018 compared with previous years, albeit at a slightly slower rate than this year. The slowing growth is largely due to falling private consumption demand as purchasing power growth will be slower than this year. Employees’ purchasing power will be weakened by accelerating inflation despite at the same time being supported by an upswing in employment. Domestic inflation will accelerate next year and will be seen more broadly across the commodity groups than in 2017. The biggest price increases will be in services. Price rises will also be fuelled by an upward movement from the current low interest rate environment. The rise in prices will be slowed down by the strengthening of the US dollar and the continued moderate oil prices. Moderate growth in gross domestic product (GDP) will impact positively on employment, but the decrease in the number of unemployed persons will still be slow. In 2018, the employment rate will rise to around 70% while the unemployment rate will fall to around 8%. Various regional and occupational mismatch problems stand in the way of more favourable employment development. Export growth will continue at a good rate until the end of the outlook period. The decline in market shares will come to an end and exports are set to grow steadily, driven by growth in world trade. Export growth will continue to arise primarily from exports of goods, which will also increase imports of production inputs. The number of new orders and high confidence reported are indicative of good export prospects. The growth outlook for the global economy and world trade has improved recently. The positive development seen in emerging economies and the United States will continue, and the role of the euro area will be emphasised in the future. Economic growth in the euro area will climb further to just over the 2% mark next year. Finland’s general government finances have been strengthened by the fiscal adjustment decisions taken by the Government and the economic growth triggered last year. Despite this positive development, general government finances will still remain in deficit until the end of the decade. Due to population ageing, the budgetary position should be clearly in surplus at the beginning of the 2020s