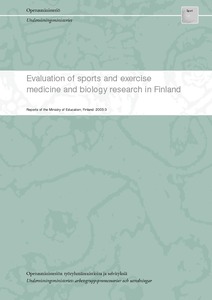 Reports of the Ministry of Education 2003:3
This publication is copyrighted. You may download, display and print it for Your own personal use. Commercial use is prohibited.
Näytä kaikki kuvailutiedot
Tweet

In general, the scientific quality of research was evaluated as very high in many areas of biomedical and biological sports research, and it was judged to comply well with the international standard in the field.

- In epidemiology, the strengths were well-conducted cohort studies with long follow-up times, carefully planned and conducted intervention studies (including demanding randomized controlled trials), and efficient use of national register data. Collaboration with scientists in basic research needs to be continually strengthened.
- In rehabilitation research, the strengths were found to be well-conducted studies that were focused on the treatment of musculoskeletal injuries associated with activity in children, middle-aged subjects and the elderly
- The scientific quality of research that has focused on biomechanics was found to be excellent and a welcome complement to outstanding clinical research programs. Research in this area was found to be highly relevant to athletes, active individuals and the elderly.
- In exercise physiology in general, the scientific quality of research was considered to be good compared to international standards. Exercise physiology has much to offer for purposes of clinical treatment and rehabilitation.
- The quality and quantity of basic research was, in general, considered to be only rather good. This is a new field of research in sports medicine, and in this light it is understandable that, for the most part, research groups have no long-term basic research tradition.
- The number of peer-reviewed papers published in high-impact journals reflects the generally good international standard of Finnish research. Some of the units had published their work in low-impact journals that were incompatible with the high scientific quality. All research groups are encouraged to keep their ambition level in publishing as high as possible.
- The number of citations for the published papers reflects the impact of studies within the scientific community. The mean number of citations was 6.9; and for the highest-ranking research unit this mean was 15.8. Based on these figures, the impact was considered good.

National networking seemed to function well and was found to involve many universities and research institutes. The research groups have wide international contacts that in some cases have resulted in productive joint research projects and publications. Only a few groups have received funding from the EU or other foreign sources. International collaboration should be enhanced and include collaboration with European research groups. This could facilitate obtaining research funding from the EU. The quantity and quality of researcher training The quantity of researcher training was considered good. The review found that most students completed their doctoral training at a relatively young age. It was noted that it was not always easy to recruit graduate students. Another current problem is the shortage of posts for post-doctoral researchers.

The quality of researcher training varied substantially from one unit to another, the general tendency being that big units performed better than smaller ones. It is recommended that graduate students be registered in an appropriate graduate school.

Short-term, one-year funding cycles create an insecure research environment, and make the long-term planning of future research programs difficult. They also influence security of employment for young researchers, and make the choice of research as a career less attractive. The same is true for the practice of awarding personal grants without paying any social security contributions. Many of the research groups seem to be very dependent on funding from the MoE. In general, the research units/groups are encouraged to actively apply for funds also from other sources besides the MoE and the scientist in the basic research from the Academy of Finland, in particularly.

Organizationally, sports and exercise research is split into too many units, many of which were considered to be too small to reach the desired critical mass. A separate overall evaluation of sports medicine centers is recommended - the evaluation group could not take into account any functions of the centers other than research. From the research point of view, it would be better to have fewer but stronger units with sufficient critical mass to successfully conduct high quality research programs and ensure sustainability.