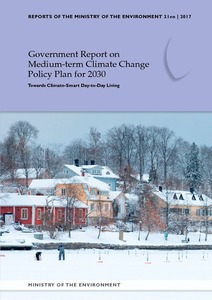 Ministry of the Environment

Reports of the Ministry of the Environment 21en/2017
This publication is copyrighted. You may download, display and print it for Your own personal use. Commercial use is prohibited.
Näytä kaikki kuvailutiedot

Provisions on the medium-term climate policy plan have been laid down in the Climate Change Act (609/2015). The plan sets the emissions reduction target for greenhouse gases to 2030 and specifies the actions to be taken to ensure that the targets are reached and that they are compatible with the long-term climate change objective.

The plan applies to the non-emissions trading sectors, i.e. the so-called effort sharing sector. This comprises transport, agriculture, building specific heating, waste management and F-gas emissions. Together with the Energy and Climate Strategy completed at the end of 2016, the plan implements the climate and energy policy objectives set in the Government Programme. The plan further specifies and supplements the emissions reduction actions set out in the Energy and Climate Strategy. Linkages and cross-cutting themes between the sectors are also examined, including the role of consumption and work on climate change issues done locally. The preparation of the plan was based on the same baseline scenario as was used for the Energy and Climate Strategy.