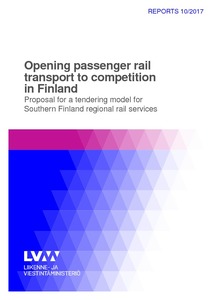 Reports 10/2017
This publication is copyrighted. You may download, display and print it for Your own personal use. Commercial use is prohibited.
Näytä kaikki kuvailutiedot
Tweet

This report begins with a concise description of the measures adopted by the Government to open passenger rail transport to competition. It then discusses the state of play of passenger rail services, legislation in this sector, as well as the responsibilities and tasks of the authorities in rail transport.