Everyman’s rights and the code of conduct on private land 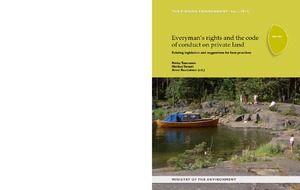 The Finnish Environment 5en | 2015
This publication is copyrighted. You may download, display and print it for Your own personal use. Commercial use is prohibited.
Näytä kaikki kuvailutiedot

This publication is intended for anyone who wishes to gain a broader understanding of everyman’s right. In particular, the publication is targeted at authorities, associations and the representatives of private companies.

The publication discusses everyman’s right on the basis of current legislation, without making any claim to presenting new interpretations regarding the scope or content of the right. Ultimately, the framework and guidelines for the public’s right to take advantage of everyman’s right are set forth in legislation. As legislation often defines only the boundaries for punishable conduct, this publication also discusses the best practices of public land access, and provides suggestions for preventing problems.

Everyman’s right is discussed from the multiple perspectives of outdoor recreation, land use, land ownership and the people that exercise this right.

This publication does not provide a criterion for assessing the permissibility of any individual act, as courts always interpret the legislation in light of the special characteristics and circumstances of the cases presented to them.