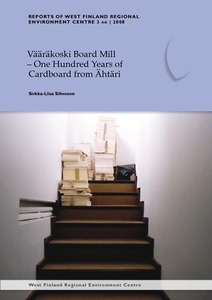 LSUra 3/2008
This publication is copyrighted. You may download, display and print it for Your own personal use. Commercial use is prohibited.
Näytä kaikki kuvailutiedot
Tweet

Vääräkoski, along the River Hyvölänjoki in Ähtäri, was a busy industrial site for roughly one hundred years. Founded in 1898, beside the Vääräkoski rapids, the Board Mill was declared bankrupt in 1998. The Vääräkoski Board Mill was classified as a nationally significant environment in terms of its cultural history, in a report titled “Rakennettu kulttuuriympäristö” published by the National Board of Antiquities and the Ministry of the Environment in 1993. A protection order was issued for the mill buildings and machinery, pursuant to the Act on the Protection of Buildings, in 2002.

The transition from rags to ground wood pulp also stood as a turning point for the forest industry in Finland in the 1860s. It meant the birth of the ground wood pulp industry. The technology of cardboard manufacturing developed in the late 1890s, as a result of technical innovations. Previously, the labour-intensive cardboard manufacture, including many different work phases, took a decisive step towards mechanical process industry. The first cardboard machine was purchased by the mill at Inkeroinen, from Germany in 1897. The cardboard machine bought by Vääräkoski in 1901 was the fifth in Finland. Vääräkoski Board Mill was small on the Finnish scale, and its production remained relatively constant up until the end. The mill specialized in cardboard, and Vääräkoski’s only cardboard machine annually produced 1000 – 4000 tons of cardboard.

The value of Vääräkoski is based on the mill complex that has retained its many-faceted nature and on its buildings and machinery that have been preserved in almost their original format – e.g. the cardboard machine is one of the few machines in our industrial history that is a hundred years old. This inventory report is published to leave something for the future generations to read on the Vääräkoski Board Mill.