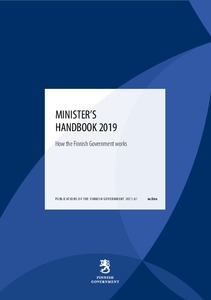 Publications of the Finnish Government 2021:61
This publication is copyrighted. You may download, display and print it for Your own personal use. Commercial use is prohibited.
Näytä kaikki kuvailutiedot

The Minister's Handbook contains key information on the organisation and work of the Government. It describes the role of ministers as members of the Government, how they contribute to the preparation of matters, how they participate in decision-making and in parliamentary work, and what their ministerial responsibilities are. The Handbook gives a detailed description of the main preparatory processes for advancing the Government's policies and programmes and describes the ways in which the Government and Parliament work together. The role of ministers in European Union affairs and in Finland's other international relations is also explained in detail. In addition, the Handbook sets out information on the benefits, support services and security arrangements for ministers and on the work of State Secretaries and Special Advisers to ministers.