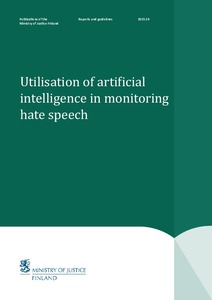 Publications of the Ministry of Justice, Reports and guidelines 2021:19
Näytä kaikki kuvailutiedot

The report is produced by project Facts Against Hate coordinated by Ministry of Justice. One of the objectives of the project is to pilot the use of artificial intelligence (AI) in monitoring hate speech. The aim of the monitoring is to gain an overall picture of hate speech. Goals include gaining an understanding of the channels in which hate speech occurs and discerning differences in hate speech on the different platforms.

The report presents the findings of AI-assisted hate speech monitoring. The approach employed was a combination of human analysis and machine learning.

The dataset for the report consisted of around 12 million comments and online posts from September–October 2020. According to the findings, hate speech as defined in this report was detected in around 150,000 messages a month, or in 1.8% of total messages, on public Finnish-language online platforms. Over the two-month period reviewed, 1 September – 31 October 2020, a total of 298,032 hate speech messages were identified and 97% of these were detected in various discussion forums. The next most common platform for hate speech messages was Twitter (2.5%). The dataset does not include closed groups and private accounts on Facebook.

The authors assume all responsibility for the contents of the publication. The contents do not necessarily represent the views of the Ministry of Justice of Finland or the European Commission, which is funding the Facts Against Hate project.