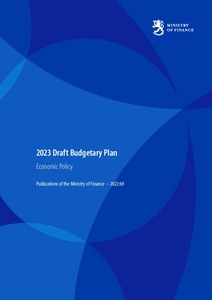 Publications of the Ministry of Finance 2022:69
This publication is copyrighted. You may download, display and print it for Your own personal use. Commercial use is prohibited.
Näytä kaikki kuvailutiedot

Under Regulation (EU) No 473/2013 of the European Parliament and of the Council (regulation on common provisions for monitoring and assessing Draft Budgetary Plans and ensuring the correction of excessive deficit of the Member States in the euro area), euro area Member States are required to submit their Draft Budgetary Plans (DBPs) for the forthcoming year to the European Commission by 15 October.

The DBPs are part of the coordinated surveillance exercise, which takes place every autumn. The DBP contains the details of macroeconomic forecasts and assumptions, targets for general government finances, expenditure and revenue projections under the no-change scenario, expenditure and revenue targets, discretionary measures contained in the Budget proposal, the goals set out in the European Union's strategy for growth and jobs, and Country-Specific Recommenda-tions, a comparison between the DBP and the most recent Stability Programme and an appendix on methods. The General Escape Clause of the Stability and Growth Pact was activated in March 2020 and will also remain in effect in 2023. The 2023 Draft Budgetary Plan is based on the proposal for the 2023 Budget presented by the Government to Parliament, which is largely based on the spring 2022 spending limits decision, 2022 supplementary budgets and the Local Government Finances Programme for the year 2023.