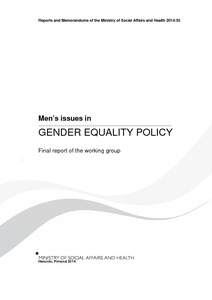 The working group on the Male Issues in Equality Policy project appointed by Paavo Arhinmäki, the Minister for Gender Equality, began its task in January 2013. The working group consists of representatives of men's organisations, boy action groups, Seta and TANE, the Council for Gender Equality. The working group s term of office ended on 15/10/2014. When the working group was set up, its tasks were to identify new gender equality issues relat-ing to men and define older issues more closely, expedite measures concerning men under the Government Action Plan for Gender Equality, develop interaction between ministry officials and men's organisations, and organise a seminar on men and gender equality. The working group's goals included that of enabling men and women to feel that equality is something that is common to both genders and that gender equality policy is a policy that is also common to both genders and policy measures to promote gender equality, but also to resolve male problems and the establishment of male diversity. In February 2014, the working group published an interim report containing background infor-mation and statistics on male issues in greater depth than in the final report and a description of the historical development of male issues in Finland. It was decided to keep the final report compact, containing just the working group's proposals and their arguments for them. The final report was compiled based on discussions among the working group, and an attempt was made to include the views of everyone, although compromises were made and certain limits were put in place.