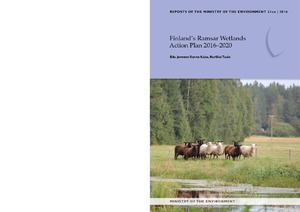 Kristiina Niikkonen, Ministry of the Environment

Finland’s National Ramsar Wetlands Action Plan 2016–2020 was prepared as part of the Strategy for the Conservation and Sustainable Use of Biodiversity in Finland for 2012–2020 and the related action plan for 2013– 2020, adopted by a Government resolution on 20 December 2012. This strategy and action plan were updated to correspond to the goals specified in the Convention on Biological Diversity, CBD (78/1994), as well as the biodiversity strategy targets agreed upon in the EU. The aim of the Ramsar Convention (Convention on Wetlands of International Importance Especially as Waterfowl Habitat) is to protect internationally valuable wetlands and, in a broader sense, to promote the sustainable use of all wetlands and water resources. The international strategy for the years 2016–2024 was approved at the 12th meeting of the Conference of the Parties (2015). This action plan is part of the contribution of Finland to its implementation. The Ramsar strategy emphasises the particularly poor condition of wetlands: of all the habitats in the world, wetlands are the most threatened. The loss of habitats is one of the key reasons behind the global decline of biodiversity. The Ramsar strategy implements the so-called Aichi Biodiversity Targets of the CBD and several of the goals set in the UN 2030 Agenda for Sustainable Development. According to the latest assessment of the conservation status of habitat types in Finland, the state of wetlands is poor: roughly half of the wetland habitat types in the Baltic Sea, the coast and inland are classified as threatened. The action plan includes a review of the current state of wetlands and presents an analysis of the strengths, weaknesses, threats and opportunities in the protection and sustainable use of wetlands. Based on these a total of 55 measures aimed to improve the state of wetlands have been established. The action plan also presents an estimate of the economic and environmental impacts of the plan. The action plan was circulated for comment in spring 2015. The preparation of the action plan was the responsibility of the broadly-based national Ramsar Wetland Working Group. The composition of the group is given at the end of the publication